Through the eyes of the speaker – René Lolkema

“On a physical stage, because of the bright lights, you often only see the first two rows. So, it won’t be such a big difference.” 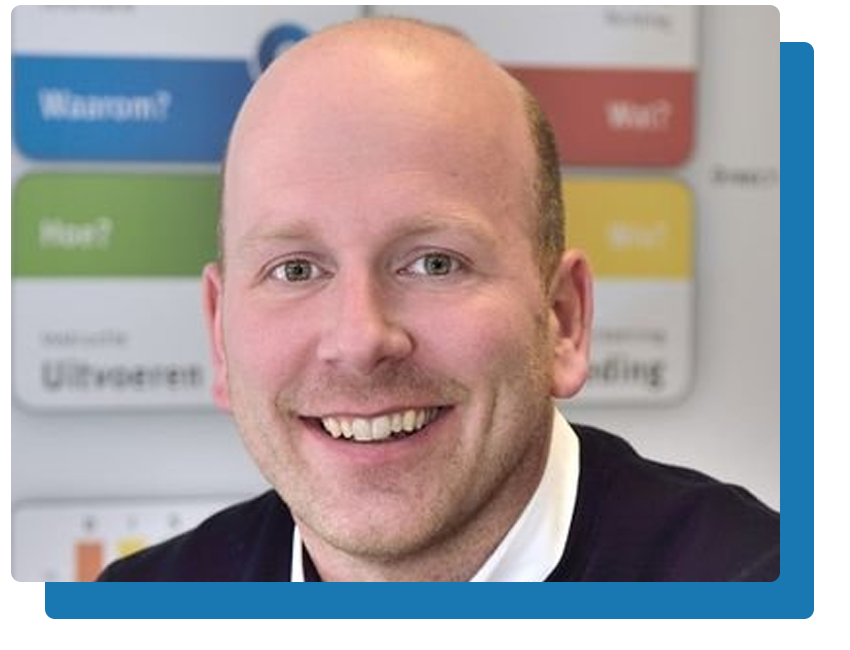 I got the most business out of networking before COVID-19. But of course, giving physical workshops or coaching sessions became less and less possible with the pandemic. I then threw the ball to several people: “Are there any other possibilities for giving workshops?” That’s how I ended up at Niquell.

I liked Niquell’s mentality: don’t sit still, but move forward, and make it happen. This mentality also fits well with the mindset of Let’s Get Digital. I find the thought behind the platform very inspiring: “What can I do?” The idea of just doing things has inspired me to think outside-the-box as well.

Thinking commercially, I also figured, yes – this is really cool. This way, I can definitely put myself on stage. I have no idea who’s looking at the stage when online, of course. However, on a physical stage, because of the bright lights, you often only see the first two rows – so, it won’t be such a big difference.

This was of course an ironic subject, since I could not see or hear my audience during my presentation. However, this made it more difficult to read the audience and to identify their needs. Still, even in online communication, you can find out a lot about someone’s needs; for example, by using certain words (in the chat) or intonation (during the network carousel).

Interaction was something else altogether. At the beginning of the presentation, I asked, “Are we live?” and got the first *ping* in the chat. Then, I turned on! The connection is there, but you also want to be able to talk to people.

Normally I try to appeal to everyone in a larger company. I base this on the DISC profiles. These profiles make a distinction between four communication styles and underlying needs. By responding to every need, I try to involve the audience in my story. This is what I did during The Showcase. Here, for example, I referred to certain Greek metaphors, which appeals to people with a yellow DISC profile. In this way I sought connection.

Of course, the response is a bit slower than during physical presentations; but even though it was minimal, I noticed that I really liked getting chat messages. That really energized me. There must have been people watching who thought ‘gosh what a bouncy ball’!

During my presentation, one moment sticks out. Somebody came in to arrange something technical, and I was distracted by what he was doing. Then, without thinking at all, I even started talking to them. For a moment, I completely forgot that I was live.

I really liked the network carousel at the end. I could see in advance who had bought a ticket, so I already had an idea of the audience – but during the networking carousel, I could really spend time with them. There were people logged in from all over the Netherlands. That was so cool to see.

At first those people were sitting safely behind their screen and, *ping* suddenly I have a viewer sitting in front of me. It’s more accessible than in real life, because there, you have to actually approach someone. I don’t have a problem with this myself, but now you also come across people you might normally walk past. That surprise is nice.

The platform also makes it easy to network. At a meeting, you talk to a lot of people, and sometimes it’s hard to find them. Now I can just scroll through the participants and add them on LinkedIn. I’ve already done business doing that.

For example, the other day I had a call appointment with a potential business customer. The subject of coronavirus came up, and I told them that a few weeks ago I was talking to a camera during an online event. Even before I could tell more about it, he suddenly interrupted me. What was it he wanted to say? He was at that event, and had already seen me live at the time. That was also the reason he had contacted me. Long story short: I’ve now just got a proposal from someone in the audience!

You can learn to innovate

The event gave me a lot of confirmation. For example, it is clear how much energy you can get from people who see opportunities, stay positive and are open to learn and make mistakes. The audience was also open to this. I found that very cool.

You become more innovative with what you do. Due to COVID-19, we stopped for a moment, but now we have advanced even further than we were before. Many parties are now in the game without looking around. But, we are curious and much more daring. Let’s Get Digital offers these possibilities. I think it’s really cool how they do it: don’t sit still, but move forward and see what’s possible.

There’s a lot more you can do. We won’t have to let that go when we have the chance to fall into our familiar structure. We have to take the learning curve with us. I do see a hybrid form happening. I certainly would bet a tenner on that. Travelling to a location and parking – that’s a long way off. The limitation is only in your mind.

Ready to be remembered?

*With our whitepaper you surely are!

Get the best of both worlds – Like Hannah Montana

What role does technology play in hybrid event management?

Hybrid event management – what should you do?

ARE YOU READY TO MAKE CAPTIVATING EVENTS?

Connect with our experts to make your next hybrid, virtual or in-person event a resounding success.

Solutions
How it works
Products
Pricing
Insights
About us
Solutions
Hybrid events
Virtual events
In-person events
How it works
How it works
Explainer videos
Products
Virtual event platform
Mobile app
Registration
Badge printing
All features
Insights
Stories
Resources
About us
About us
Our impact
Our team
Partners
Get in touch
Try now
Menu
We use cookies on our website to give you the most relevant experience by remembering your preferences and repeat visits. By clicking “Accept”, you consent to the use of ALL the cookies.
Cookie settingsACCEPT
Manage consent

This website uses cookies to improve your experience while you navigate through the website. Out of these, the cookies that are categorized as necessary are stored on your browser as they are essential for the working of basic functionalities of the website. We also use third-party cookies that help us analyze and understand how you use this website. These cookies will be stored in your browser only with your consent. You also have the option to opt-out of these cookies. But opting out of some of these cookies may affect your browsing experience.
Necessary Always Enabled
Necessary cookies are absolutely essential for the website to function properly. These cookies ensure basic functionalities and security features of the website, anonymously.
Functional
Functional cookies help to perform certain functionalities like sharing the content of the website on social media platforms, collect feedbacks, and other third-party features.
Analytics
Analytical cookies are used to understand how visitors interact with the website. These cookies help provide information on metrics the number of visitors, bounce rate, traffic source, etc.
Advertisement
Advertisement cookies are used to provide visitors with relevant ads and marketing campaigns. These cookies track visitors across websites and collect information to provide customized ads.
SAVE & ACCEPT

Sign up for our newsletter and you will never miss any more articles, inspiration, news and updates from our Let’s Get Digital platform!

This is the secret pop-up to sign up for a VIP experience during one of our personal demo's. Join for a remarkable virtual event experience.

Get a Free Demo

EventInsight is now Let's Get Digital

The best of both worlds are combined to blow your audience away with the ultimate hybrid event experience, both on-site ánd online!

Or read more about the merge with Let’s Get Digital

Get a quote - Subscription

Get a quote - Single event